Do your team spend a majority of their time with you complaining? If yes, you’re probably thinking “I wish it weren’t so, but they just come to me with problems”. So, you are needed to lead and to manage headspace. If this is out of balance, i.e. your interactions with the team entails more of them complaining then it has spiralled into a ‘I’m on your side against the company’ or the ‘parent/child’ whinge is awarding them attention. The more you foster it, the more they will whinge. It’s unlikely they are even conscious of this pattern. You may not be cognisant of the fact that perhaps at some point they were encouraged by a throw away comment of ‘my door is open, come and see me with anything’. Little did you know they would! Oh, how you may wish to turn back time. Also be aware of co-dependency. Hand on heart do you enjoy them coming to you, and feel like it’s building a relationship? Be honest with that secondary gain there. (i.e. you say you don’t want them being so needy but actually enjoy being their go-to person). In other words, unconsciously are you an enabler?

I know how it happens: we take our foot off the accelerator to deal with 100 other fires that need putting out and that rep gets away with some ‘not so good choices’ – but we’ll leave it as we don’t have the bandwidth to deal with it right now – justifying how at least they are bringing in money and frankly you can’t afford to lose them at this point. And then, before we know it, this person isn’t applying the right behaviours, be it making enough calls, doing the back-end work, being negative with other team members, whatever it is, we have to re-establish and recalibrate a ‘new’ normal again. Having a ‘bad egg’ that gets away with discordant behaviour is sending a dreadful message to all other team members.

Ensure you set standards to rethink behaviours which are not ideal. Eg. are your team taking personal calls in the day? Maybe one was ok and now it’s regularly? This conveys the message that it’s ok for everyone to do it. Standards slip when we allow a one-off to become a habit. Reset expectations so that everyone is clear of what is needed in the engine room.

Join our live, free webinar for sales leaders where I will be covering the 3 qualities needed to drive a high performing team 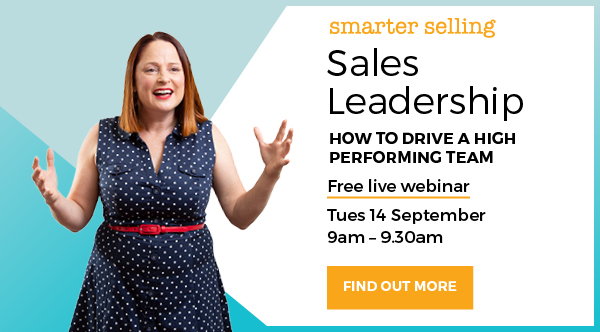